Like many other units on this platform this one is created by its founder. You may disagree with me on many issues but this is OK. The unit is not meant to convey certain wisdom about the architecture and people. All you have to do is watch, listen and think. By the way, do you know how to pronounce this word – “architecture”? The best way is to memorize the correct pronunciation of the words is by watching videos like this one:

Some people believe that buildings and houses have souls. Architect Robin Boyd said: "When I speak of an architect having some sort of personal affair with his design I am not exaggerating." This line is taken from the article with the following title: Do buildings have a soul? Architects give their verdicts on the best examples in Victoria. His colleague Burgess: I do agree that buildings have a soul. It's relatively rare. Some have more personality rather than soul. It's to do with the physical transcending itself, so that the soul is an overlap between the physical and the spiritual. You can feel that."

Architects, though, may believe that the bricks have souls either:

Louis Kahn was one of the most influential architects of the twentieth century. He lived and worked in the United States. He really died of a heart attack in Pennsylvania Station in New York. This is one of his projects: 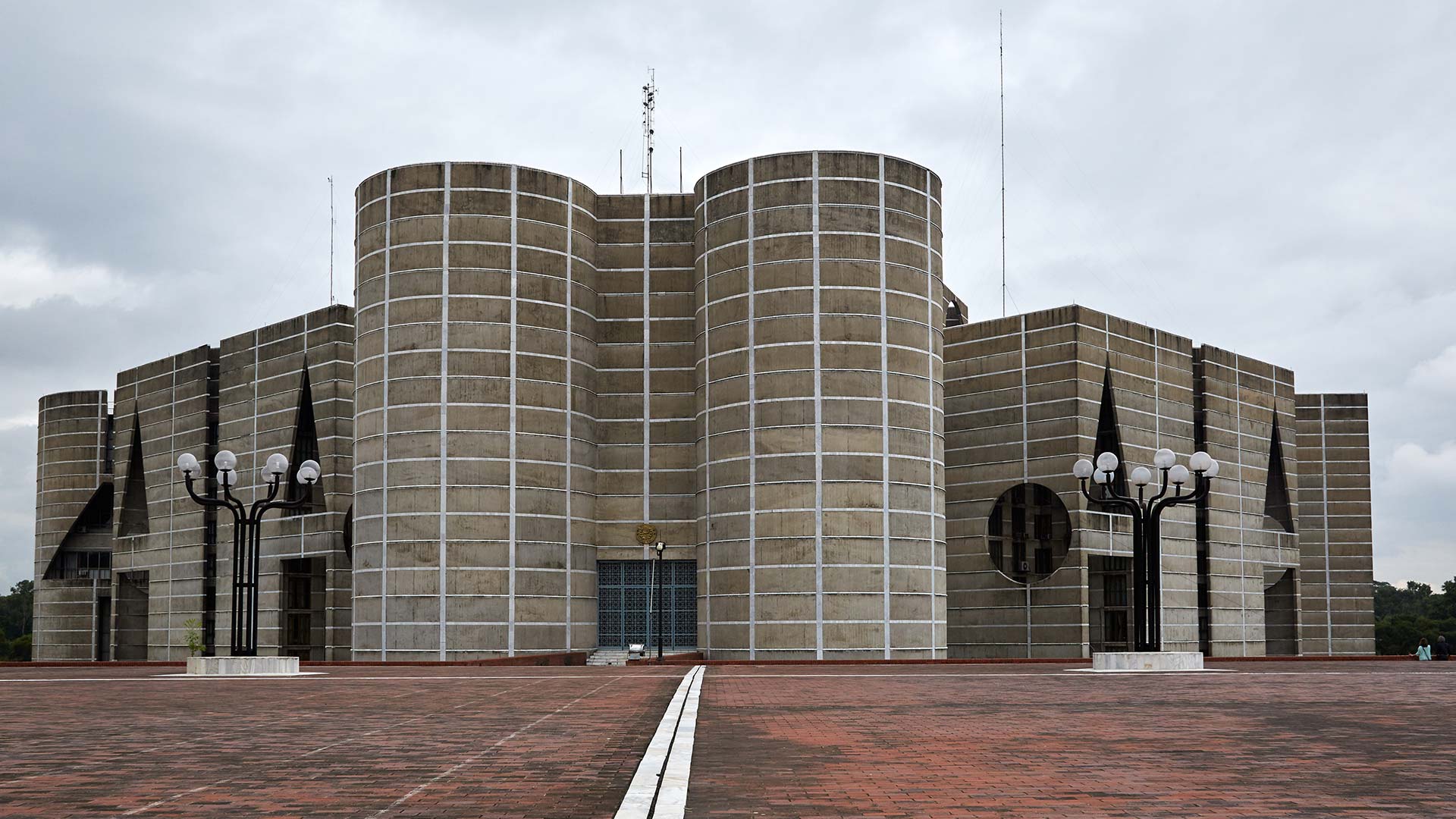 Watch one more episode from the same movie:

These were the scenes from the movie Indecent Proposal. Here is another scene from this movie that sounds less poetic and more realistic:

If you want to memorize the term “real estate”, watch this episode from Joe’s Apartment movie:

Fancy-schmancy = extremely or excessively fancy. It is one of many examples of Yiddish humor, which offers colorful ways of deflating pretension. This particular one is a way of describing someone or something that is pretentiously elaborate or overdressed.

There is one colorful word for describing the old houses - blight: something that has a very bad effect on something, often for a long time. Suppose, we need to describe the pictures like this: 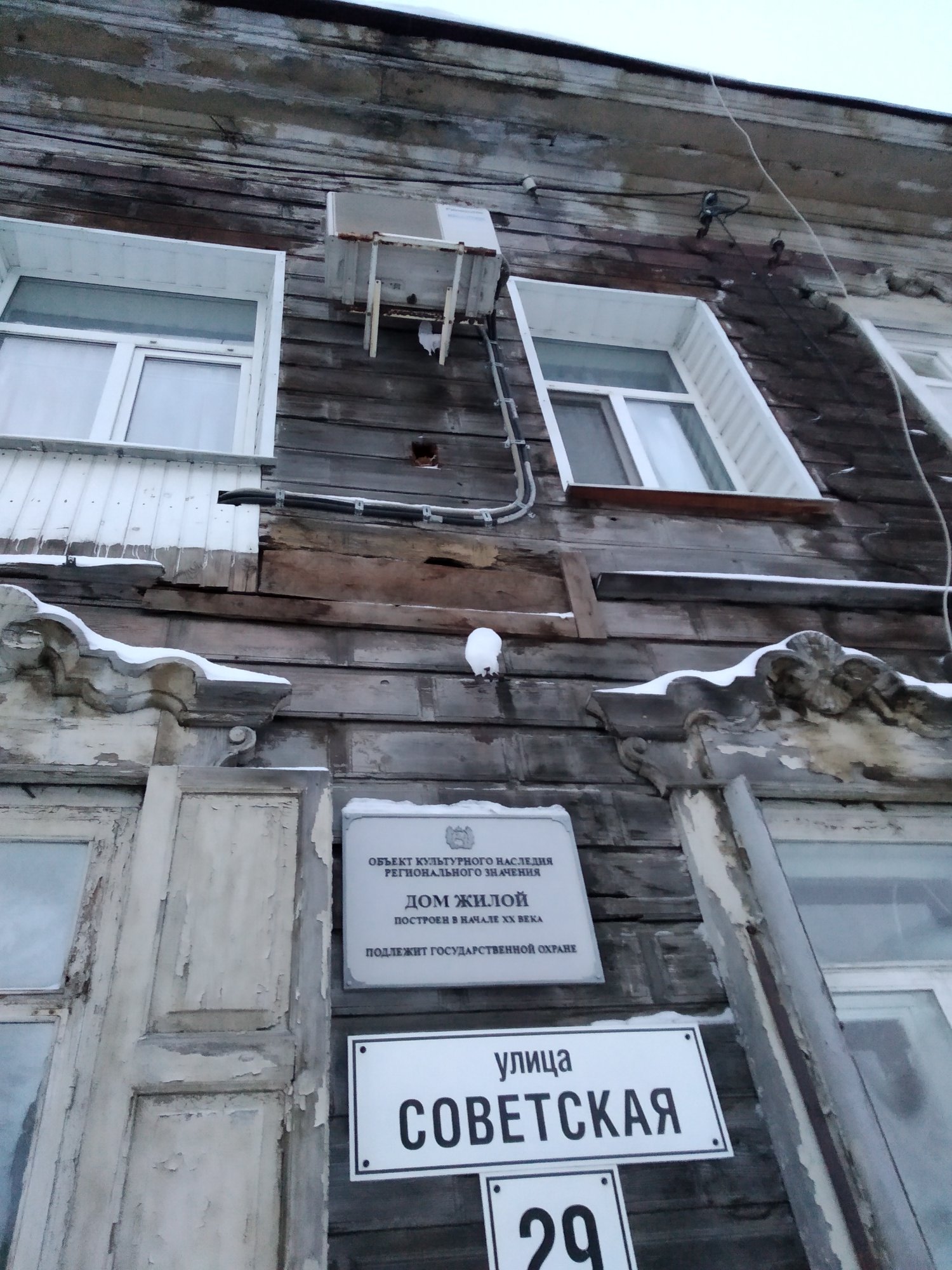 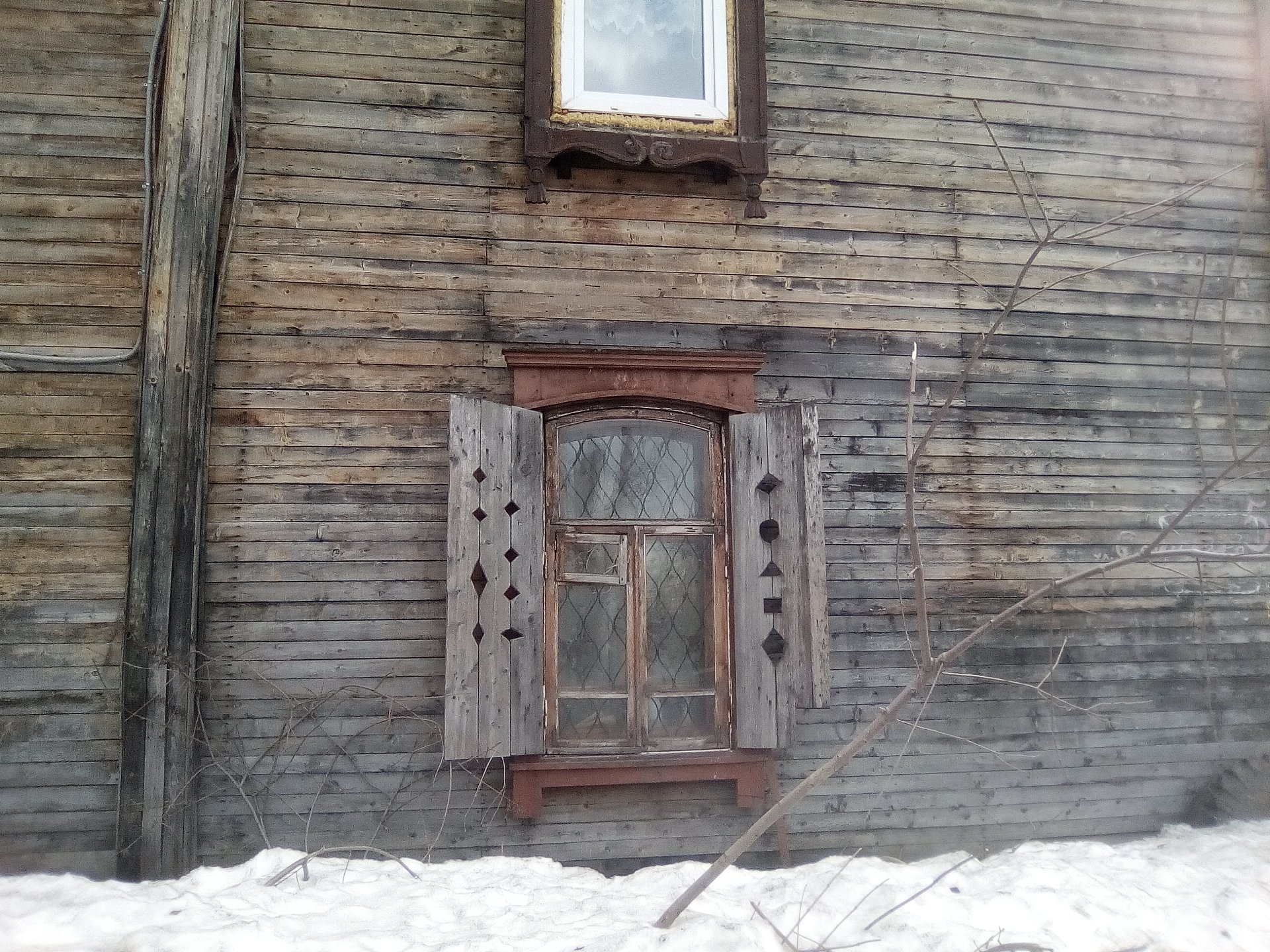 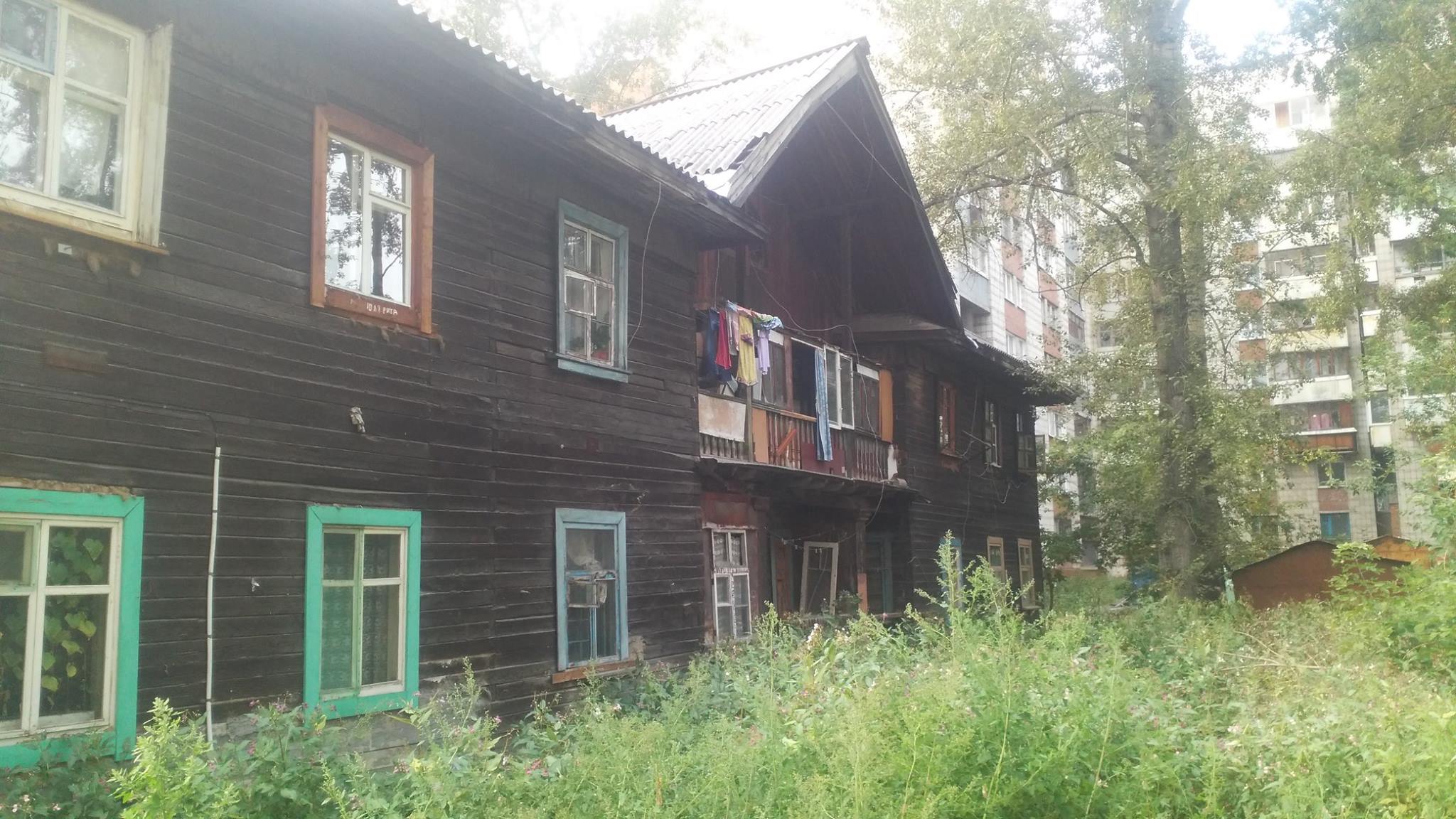 All these photographs represent Tomsk wooden architecture in downtown area. Now watch, the following video keeping in mind those “masterpieces”:

“Urban” is the word which often seems new to many English learners. This is the case with its opposite – rural:

Those who live in Russia and like wooden architecture might think that it is not all dilapidated as you saw on the photographs above. There are some masterpieces, of course. I am certain, though, the city does not need hundreds “urban blight”- style houses. This is the building my company pulled down twenty years ago and I do not regret about it:

Or do you think I was supposed to build something similar on its place? Or maybe even restore it? But business has nothing to do with insanity. There are only two conditions for old wooden buildings to survive: 1) there are those who want to live in them and this is their own choice 2) there are those who want to use them for business. There is, however, a third alternative: these building attract many tourists and there is a point to spend city’s finances for tourism alone. It is good if you disagree. Because of my logic I was called once a “market fascist”. Discuss this topic with your friends. By the way, the architects use the term «деревянщики». This is a derogatory term to describe crazy fans of wooden architecture among the professionals. They are always intolerant to others’ opinions and often ready to fight when they drink. They also use phrases like «намоленное место» proving that this is unacceptable to build the same kind of building using new materials for construction. Try to translate this absurd term into English. There is one more word of this kind – «новодел». Example: 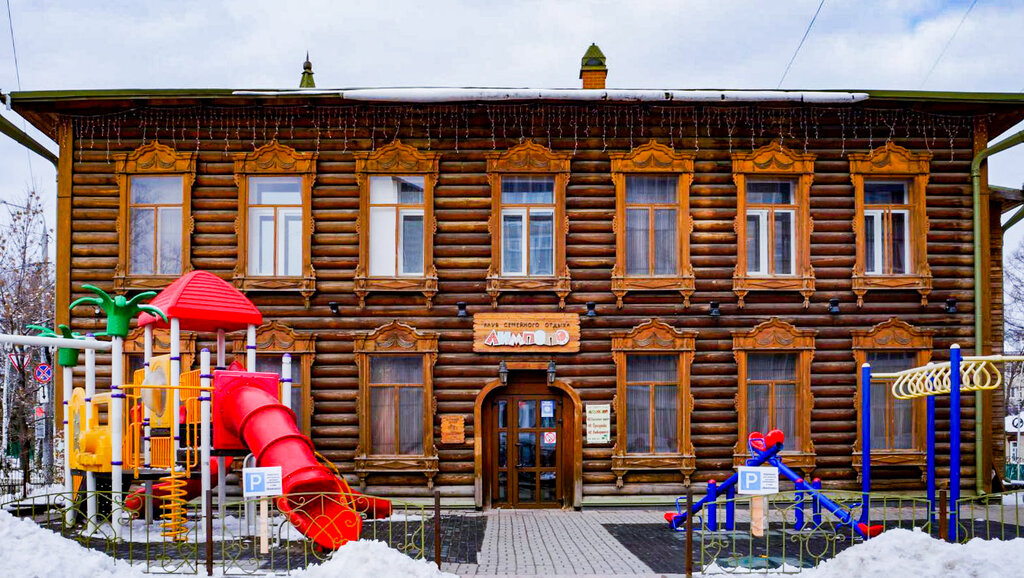 The owners of the shop built the house using bricks, but then decorated the façade with wooden logs to make the building look the way it used to look for decades. However, «деревянщики» have stopped talking about prayers when the learned that for some time there was a whorehouse…

You have to know, that one of the meanings of the word “shutters” is «ставни». The camera’s lenses may be also sometimes protected by shutters. “platband” = «наличники»…

In the country where people not only pray but worship cash, they have found the way to preserve old buildings. But they don’t look that bad as those on my photos from Tomsk. That is why they make miracles. Watch:

What is missing in the transcript? You are right if you think that the first word starts with “th” and the second from “h”. Do you understand the phrase “and brushes with disaster”? You will find the answers below.

Now the answers to the questions above: if your vocabulary is not still rich enough, you would probably hear “the whole house” or “their whole house”. But if you always suspect something different, you would first check another version – “they haul house” (to haul=to pull something heavy slowly and with difficulty). And only the curious ones will check the meaning of “hall house”: The hall house is a type of vernacular house traditional in many parts of England, Wales, Ireland and lowland Scotland, as well as northern Europe, during the Middle Ages, centering on a hall. 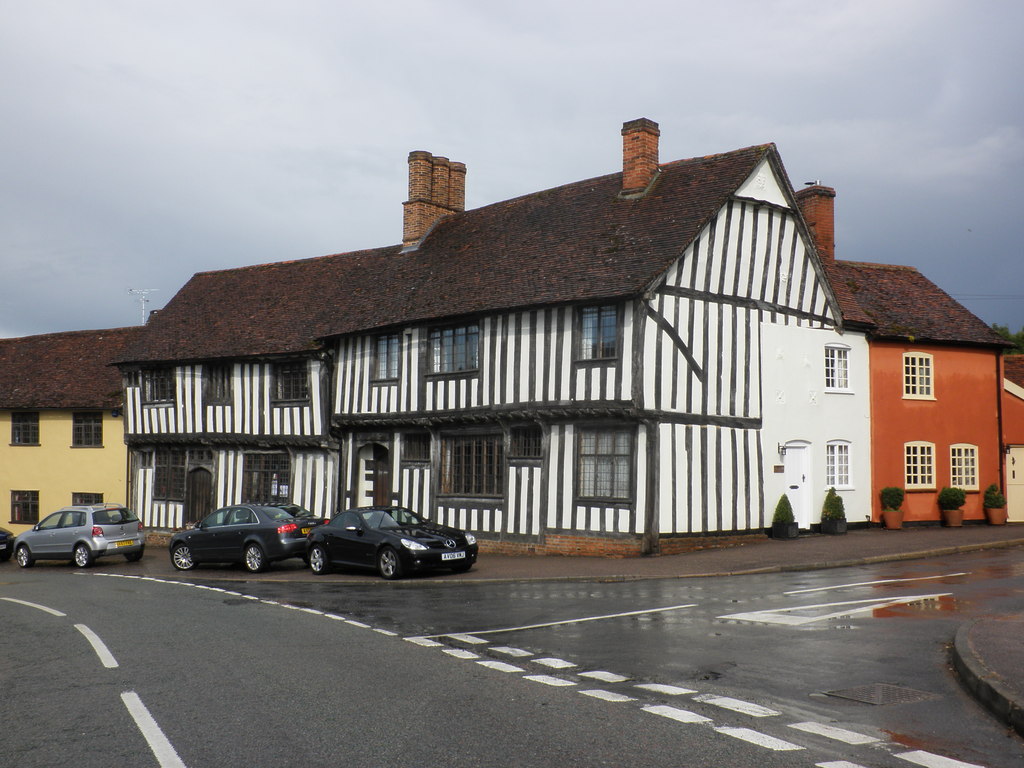 Wikipedia: vernacular architecture is architecture characterized by the use of local materials and knowledge, usually without the supervision of professional architects. Vernacular architecture represents the majority of buildings and settlements created in pre-industrial societies. Regarding the second question: it is not enough to know only one meaning of the word “brush” keeping only the image of a simple tool in your memory (with the verb). 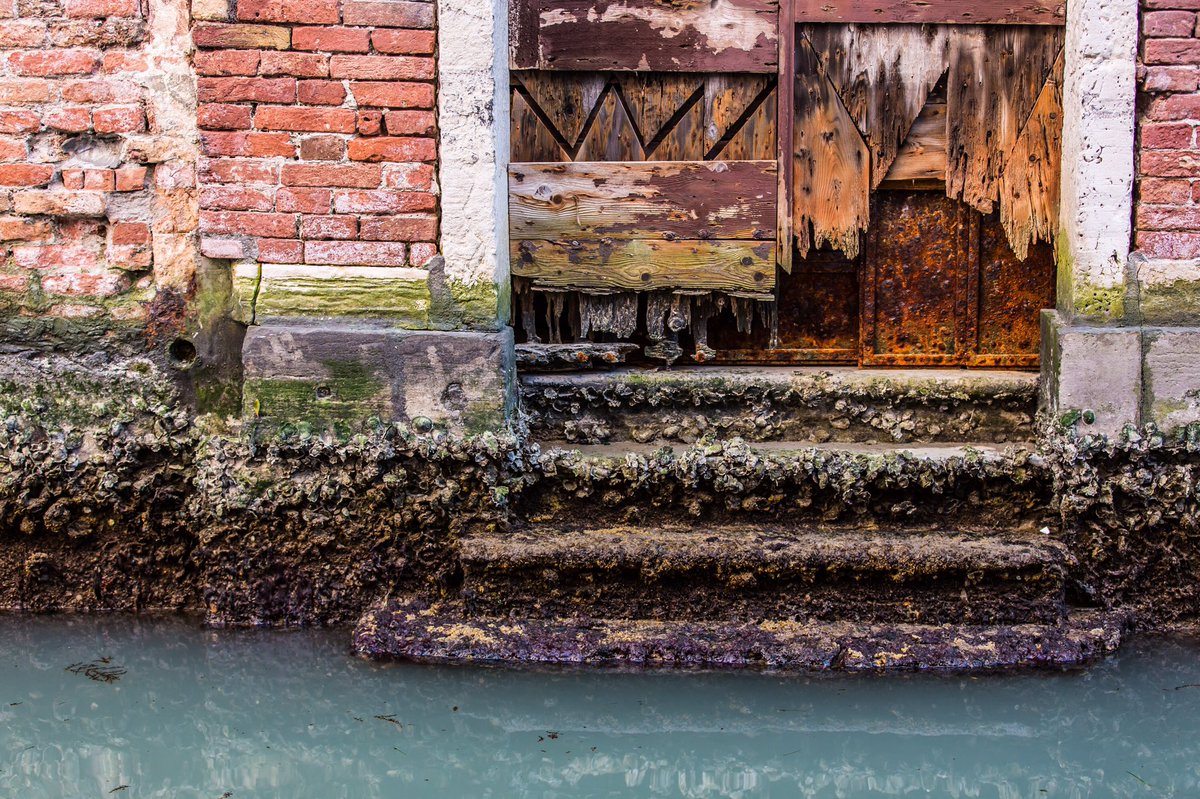 These are the episodes from the sci-fi movie City of Ember. The city was built underground to save lucky people from the global cataclysm. 200 years underground nearly destroyed the city's infrastructure. Slogans and patriotism cannot help improve the situation.

Poor girl got the job cleaning the mold from "historic buildings". In my opinion, real patriotism is helping your city and your country to get rid of the "mold" that covers many objects of so-called "cultural legacy". Sometimes altogether with these "objects". City of Ember is the movie for teenagers, of course. But it can teach us certain things. People finally left their underground "legacy" and moved to the surface to build a new life.

Look at the photograph and try to describe what you see: 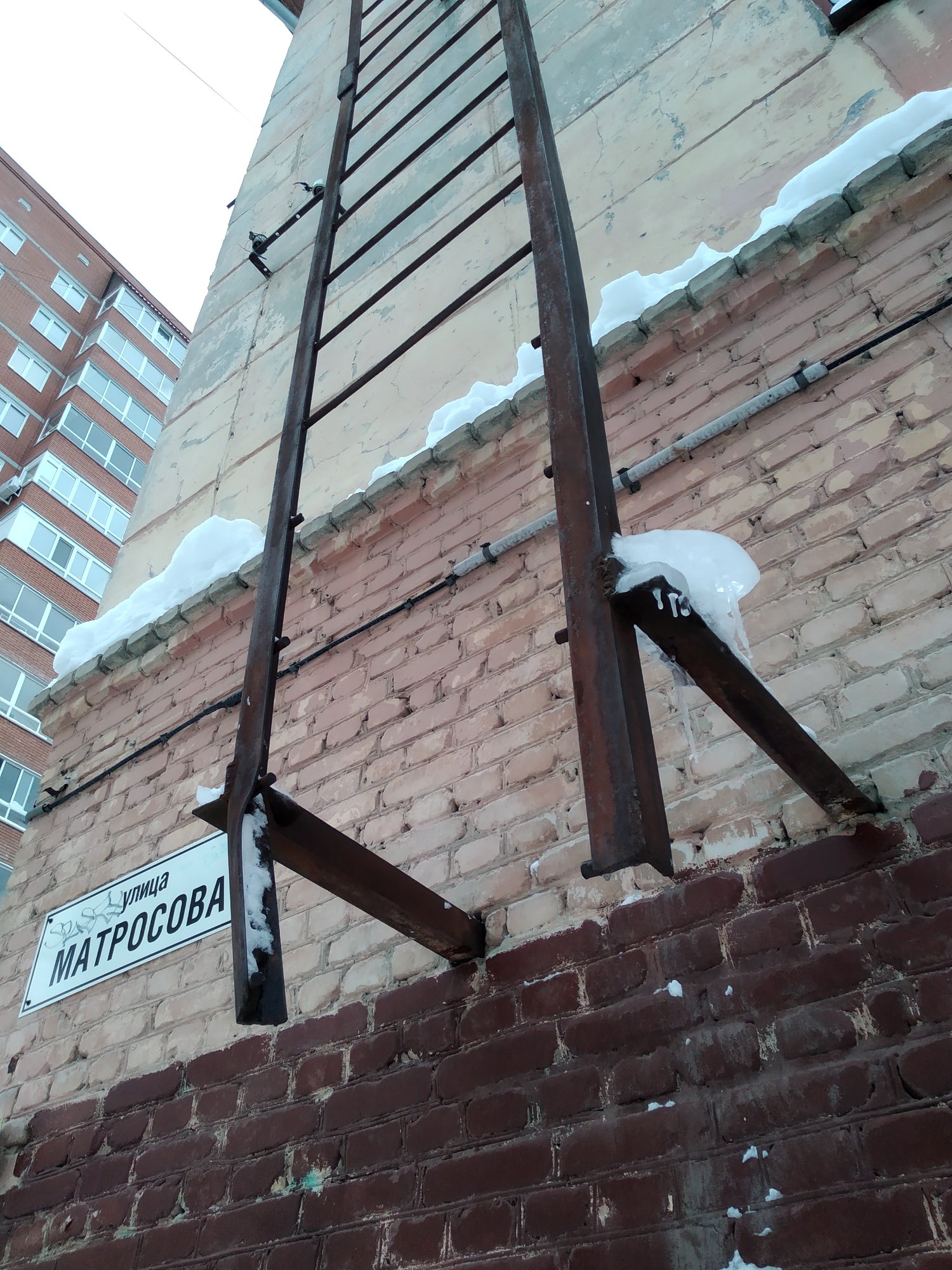 This is a ladder. It has rungs (not stairs). To be precise, this was a fire escape ladder.

I used to work for a while in this building (Novosibirsk, Akademgorodok). 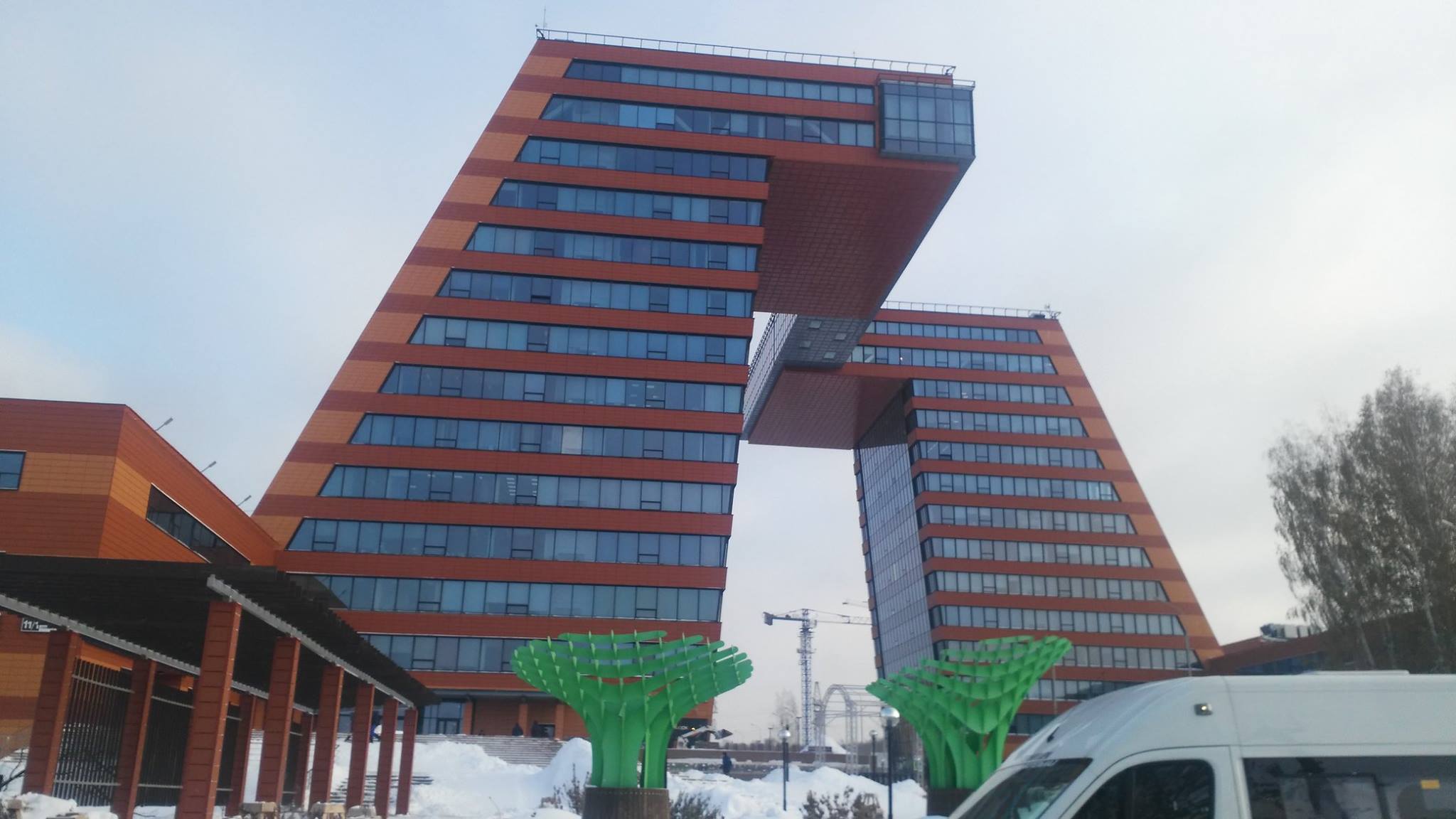 It does not seem beautiful but it is better than rotting wooden “masterpieces”. I took the following pictures during my business trip to Japan. This is my cup of tea! 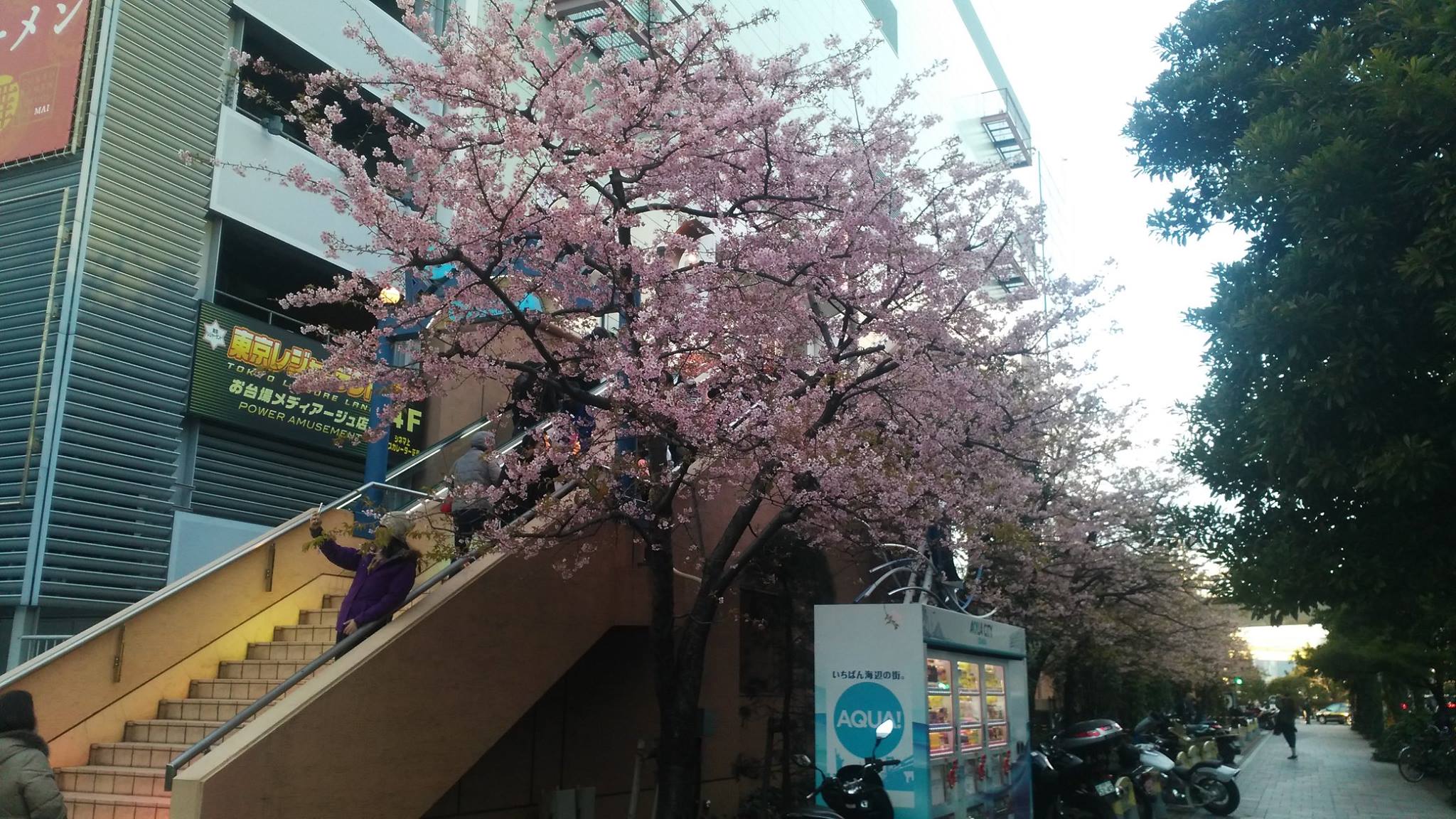 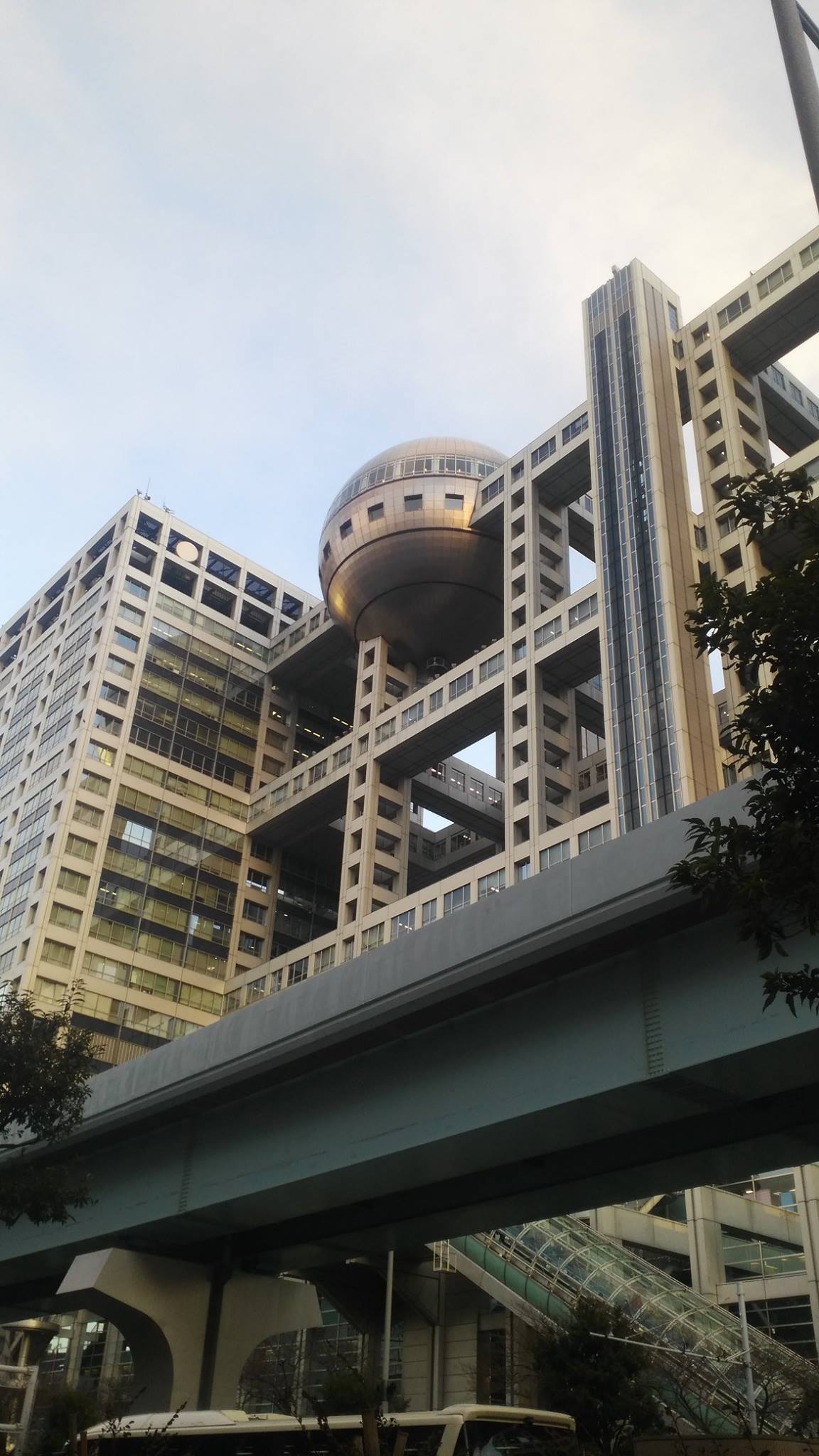 Tastes differ, but “urban blight” is not for me.  The next episode is a bonus material for the patient students (Bugsy). Enjoy this video and learn some skills for real estate business.

Ben Siegel was a gangster...