The scruffy, full-bearded Tsiolkovsky, a Russian schoolteacher by profession, was basically a visionary and chalkboard theorist, whereas American-born Goddard, highly secretive, guarded in his work, and suspicious of others, mostly targeted the upper atmosphere for his projects. Oberth was von Braun’s mentor and, like Tsiolkovsky, more noted for his theoretical work than for being a builder of useful rockets. https://ascelibrary.org/doi/10.1061/%28ASCE%29LM.1943-5630.0000162 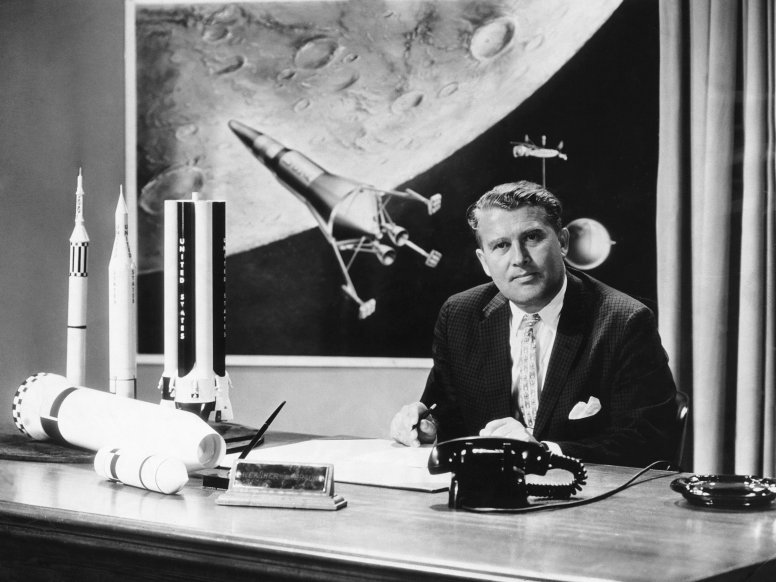 Попробуйте сами разобраться в юморе этой песни. Но знайте следующую информацию о фон Брауне: “before he was building rockets for America, he was building them for Hitler. Germany launched more than 3,000 missiles of his design against Britain and other countries, indiscriminately killing approximately 5,000 people, while as many as 20,000 concentration camp prisoners died assembling the weapons.  https://time.com/5627637/nasa-nazi-von-braun/

Dr. Strangelove or: How I Learned to Stop Worrying and Love the Bomb, more commonly known simply as Dr. Strangelove, is a 1964 black comedy film that satirizes the Cold War fears of a nuclear conflict between the Soviet Union and the United States.

Early in the 20th century, an American, Robert H. Goddard (1882-1945), conducted a variety of practical experiments in rocketry. He was interested in a way of achieving higher altitudes than were possible for lighter-than-air balloons...Dr. Goddard's 1926's earliest experiments were with solid-propellant rockets. In 1915, he began to try various types of solid fuels and to measure the exhaust velocities of the burning gases. While working on solid-propellant rockets, Goddard became convinced that rocket efficiency would be greatly improved by using liquid fuel. No one had ever built a successful liquid-propellant rocket before. Doing so was much more difficult than building solid-propellant rockets. Fuel and oxygen tanks, turbines, and combustion chambers all would be needed. 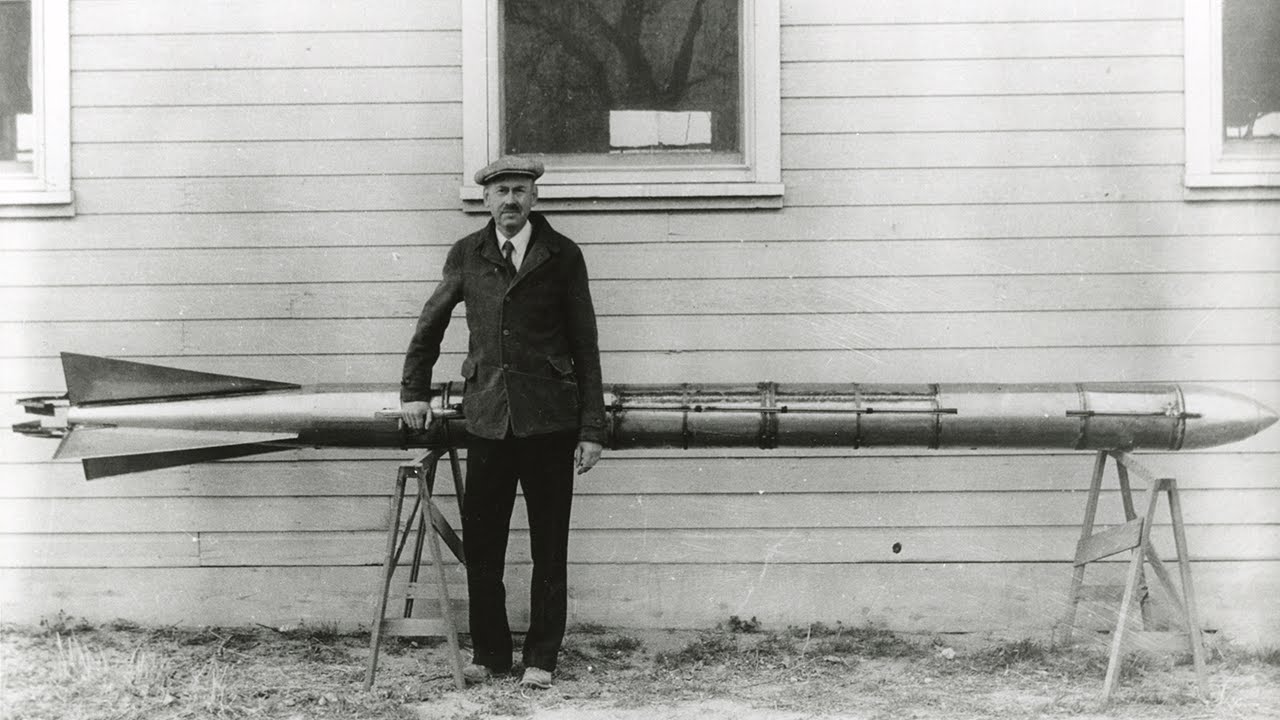 In spite of numerous difficulties, Goddard achieved the first successful flight with a liquid-propellant rocket on March 16, 1926. Fueled by liquid oxygen and gasoline, the rocket flew for only two and a half seconds, climbed 12.5 meters, and landed 56 meters away in a cabbage patch. By today's standards, the flight was unimpressive. But like the first powered airplane flight by the Wright brothers in 1903, Goddard's gasoline rocket was the forerunner of a whole new era in rocket flight. Goddard's experiments in liquid-propellant rockets continued for many years. His rockets became bigger and flew higher. He developed a gyroscope system for flight control and a payload compartment for scientific instruments. Parachute recovery systems were employed to return rockets and instruments safely. Goddard, for his achievements, has been called the Father of Modern Rocketry.

Там же написано и про нашего «отца»: n 1898, a Russian schoolteacher, Konstantin Tsiolkovsky (1857-1935), proposed the idea of space exploration by rocket. In 1903, Tsiolkovsky published a report entitled Exploration of the Universe with Rocket Propelled Vehicles. In it, he suggested the use of liquid propellants for rockets in order to achieve greater range. Tsiolkovsky stated that the speed and range of a rocket were limited only by the exhaust velocity of escaping gases. For his ideas, careful research, and great vision, Tsiolkovsky has been called the Father of Modern Astronautics.

In 1923 a third great space pioneer, Hermann Oberth (1894-1989), published a book entitled The Rocket into Interplanetary Space. His book became the handbook for amateur rocketeers. Because of Oberth's work, many small rocket societies sprang up around the world. In Germany, the formation of one such society, the Verein fur Raumschiffahrt (Society for Space Travel), led to the development of the V-2 rocket, which was used against London during World War II. In 1937 Oberth and other German engineers and scientists assembled in Peenemunde on the shores of the Baltic Sea. There the most advanced rocket of its time was built and flown under the direction of Wernher von Braun. For his achievements, Oberth has been called the Father of Space Flight. 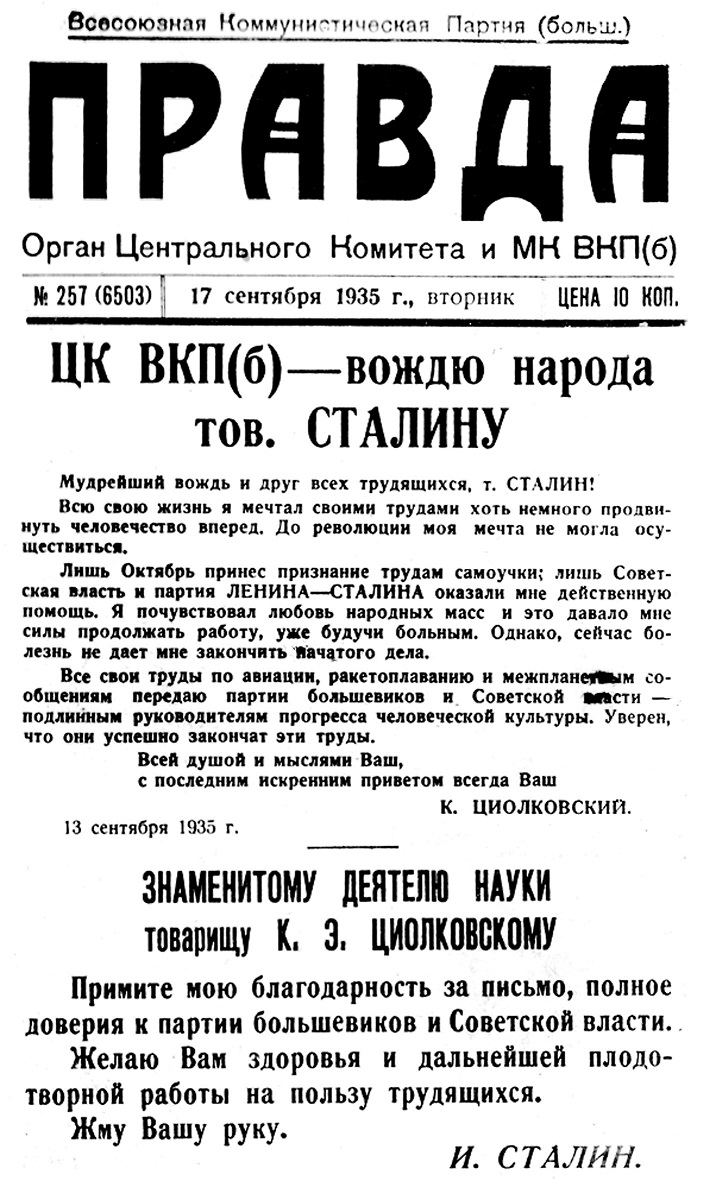