The word of the month

We start from the very controversial statement: you know neither Russia nor the United States if you don’t understand this picture looking at it at the beginning of 2021: 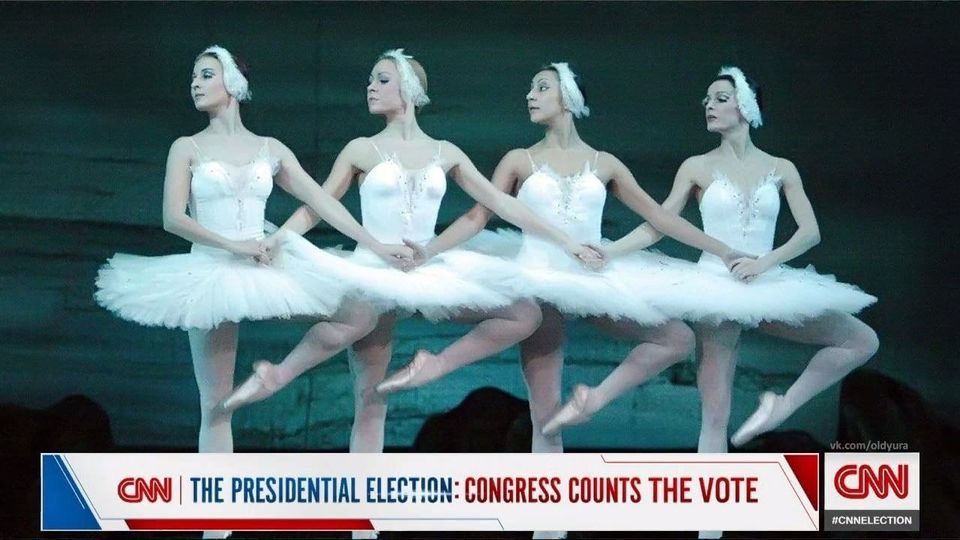 There will be no explanation in this unit. You are supposed to find the answer yourself. But you will learn one of the most important words for understanding world history and modern-day events - coup. The author of this unit has been using this word as shibboleth nearly all his life. There is a joke, that due to the pandemic, the US stopped financing and staging coups abroad. That is why they decided to do it at home.

On the 12th January 2021, the Urban Dictionary has called the “pseudocoup” the word of the day:

It is because one week earlier, a mob of Donald Trump’s supporters forced its way into the Capitol,overwhelming police and smashing windows.

Think about the phrases “halls of power” and “corridors of power.” Both terms refer to places where people talk about issues and make important decisions about political matters. The term “corridors of power” was first used by C.P. Snow in his novel Homecomings (1956). Why do you think in Russian language, only one version is used (the one containing “corridors”)?

You have to be familiar with American history to judge this protestor’s mood and his words:

Watch now the following episode and you will probably comprehend the historical roots of this event:

American society historically has been built around the individual rights, including the inconceivable for other nations right to revolt. And it was formed not only as a result of wars for independence with Britain: states fought for the territory and for the independence from each other while citizens needed arms to protect their lives and property. This is a uniquely American political tradition: people have a moral right to revolution. When a government becomes tyrannical, the citizens may overthrow it and institute a new oneby force of arms . We may call the man expressing his thoughts in the previous video “protester,” but most media, especially liberal ones, use other terms ranging from “rioters” to “thugs.” Labels matter, of course. What actually happened in Capitol? 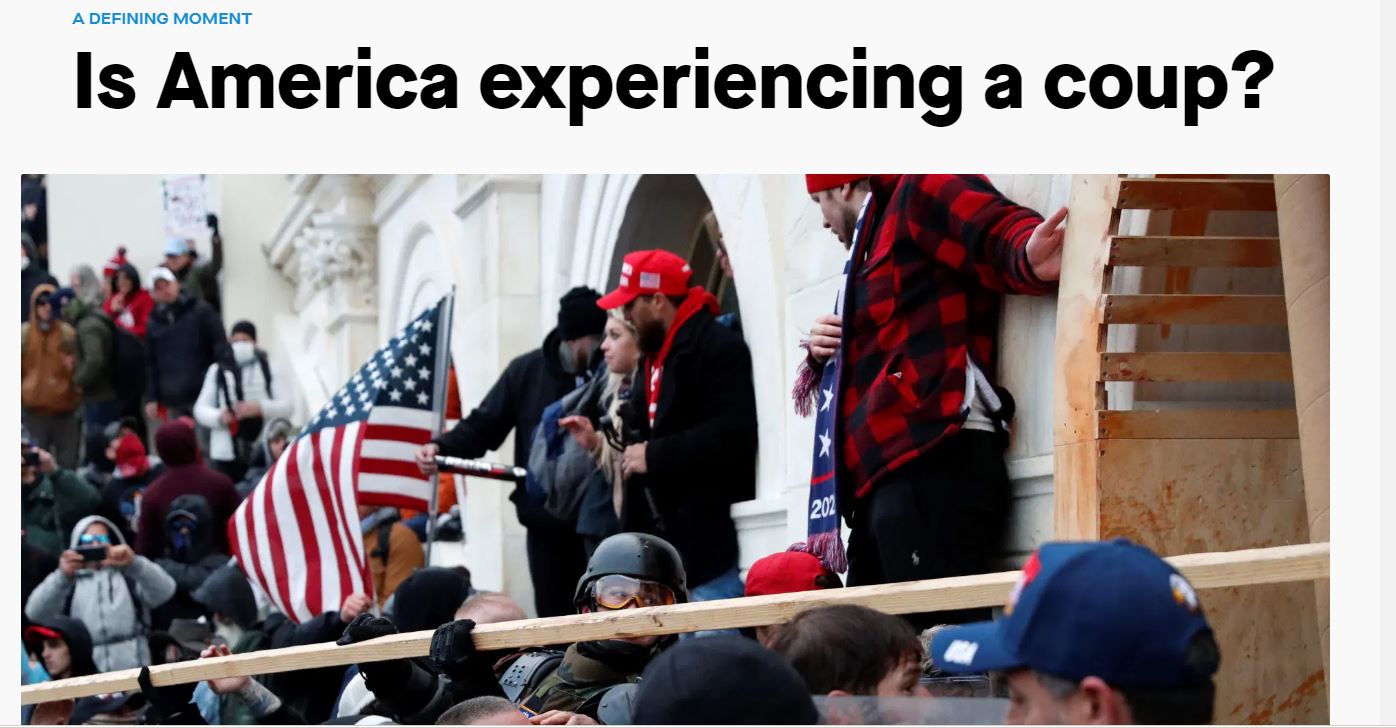 The rioters forced lawmakers into hiding, occupied the House and Senate offices' floor, trying to derail the certification of president-elect Joe Biden’s victory in the elections. This was undoubtedly dangerous and undemocratic act, but are we supposed to call it a coup?

Biden, in his televised response to the violence used the word “insurrection.” Definition of insurrection: an act or instance of revolting against civil authority or an established government. Other commentators have dubbed it a coup or sedition. CBS called the people who stormed the capitol “protestors,” while other media used the word “mob.” There were also “pro-Trump extremists.” So was this a coup? Probably not, because it was too chaotic and pointless to fit the definition. Merriam Webster says it’s “a sudden decisive exercise of force in politics, especially: the violent overthrow or alteration of an existing government by a small group.” Political scientists argue that a coup must be a secret, premeditated conspiracy by a small group of plotters and it must involve the military. Some of Trump’s critics say that he is too disorganized to plan and plot. Another word used by media to describe the even was “the siege.”

In his essay “Politics and the English Language,” George Orwell wrote that our words can shape our thoughts, politics, and actions. If we use misleading labels describing the events, it can be more difficult to find solutions to the problems. Quote: “But if thought corrupts language, language can also corrupt thought. A bad usage can spread by tradition and imitation even among people who should and do know better. The debased language that I have been discussing is in some ways, very convenient. Phrases like a not unjustifiable assumption, leaves much to be desired, would serve no good purpose, a consideration which we should do well to bear in mind, are a continuous temptation, a packet of aspirins always at one's elbow…When the general atmosphere is bad, language must suffer.” And the atmosphere in America and the world in 2020-21 was really bad.

You cannot learn the language ignoring politics! One more quote from Orwell’s essay: “A mass of Latin words falls upon the facts like soft snow, blurring the outline and covering up all the details. The great enemy of clear language is insincerity. When there is a gap between one's real and one's declared aims, one turns as it were instinctively to long words and exhausted idioms, like a cuttlefish spurting out ink. In our age there is no such thing as "keeping out of politics." All issues are political issues, and politics itself is a mass of lies, evasions, folly, hatred, and schizophrenia. I should expect to find — this is a guess which I have not sufficient knowledge to verify — that the German, Russian and Italian languages have all deteriorated in the last ten or fifteen years, as a result of dictatorship.” https://www.orwell.ru/library/essays/politics/english/e_polit/

If we deny these rioters to be called “protesters,” why Democrats never referred to Black Lives Matter members as rioters and looters? CNN also called rioters storming Capitol “domestic terrorists.”

Some of the characters in the photographs from Capitol resemble more the heroes of fairytales rather than people with strong political views: 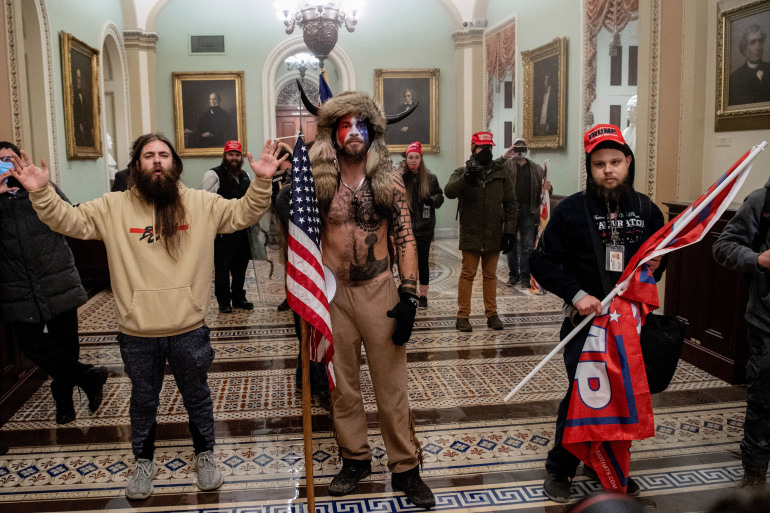 Why Trump’s fans hated then vice-president Mike Pence? Pence was vilified by both Trump and his supporters for not trying to overturn the presidential elections' results.

Look at a very interesting play on words in Italian and Indian newspapers:

Rioters were very proud of what they have done on January 6th, 2021:

You have to be impartial trying to find an explanation for what happened on 6th January 2021, in Washington. It’s easy to judge misguided gullible people and blame the former US president for instigating the “Sudoku.” Watch the following video keeping in mind the idea expressed by the man in the previous video, where he said “we are the last hope”:

Do you remember the word shibboleth used in the text above? Why the author of this unit considers the word “coup” so important? The reason is simple: this word is an excellent tool for gauging someone’s level of curiosity, and curiosity is the foundation of knowledge. Those who ignore details inevitably stay ignorant. Watch the collection of very short bits of video and try to memorize the most important word forever!

If your career brings you to a position when your speeches will be written for you by smart translators, keep in mind that the words are sometimes pronounced not the way they seem:

You are supposed to know by now the word "shibboleth." Example: Brits are class conscious and have many class indicators. Word usage helps to identify class and background. Members of the Royal family, for instance, never say "Pardon me?" It's not that "pardon" is a bad word but using it without irony indicates that you are not a member of the upper class. Instead of "Pardon me?" they would say "Excuse me." There is nothing wrong with the word: there is even the term "Royal pardon":

The name of the code-breaker is also a kind of shibboleth. Read about his fate, and you will be accepted by one more group of people.       On January 18th, 2021 some of the rioters hoped for a pardon from President Trump. Jenna Ryan, a Texan real estate agent charged in the storming of the Capitol, said: “I think that we all deserve a pardon. I’m facing a prison sentence. I think that I do not deserve that.” She thinks that there was no trespassing because they entered the Capitol at President Trump's invitation and it sounded like an order.

And what will be yours?

Now the chances are, that you will understand the meaning of the media outlet name mentioned in this video: