What is art? Introduction

What is art? Can you answer this question? Complete the phrase "Art is ..." as you see it.

Watch the video and think about the meaning of the question. What, do you think, does the journalist mean saying the words?

Art is difficult to define. In Britannica we can find the following definition:

"Art, also called (to distinguish it from other art forms) visual art, a visual object or experience consciously created through an expression of skill or imagination. The term art encompasses diverse media such as painting, sculpture, printmaking, drawing, decorative arts, photography, and installation".

In this module we will watch several videos about art and its different interpretations. Think what ideas are expressed in each video.

2.The next video is about Dan Flavin's installations and their interpretations.

Dan Flavin is an American artist, who was one of the leading exponents of Minimalist art and importantly influenced the direction of international contemporary art (read more here).

What is your attitude to such forms of art?

3.Now look at the work by the British artist and political activist Banksy and think how art can be connected with politics. 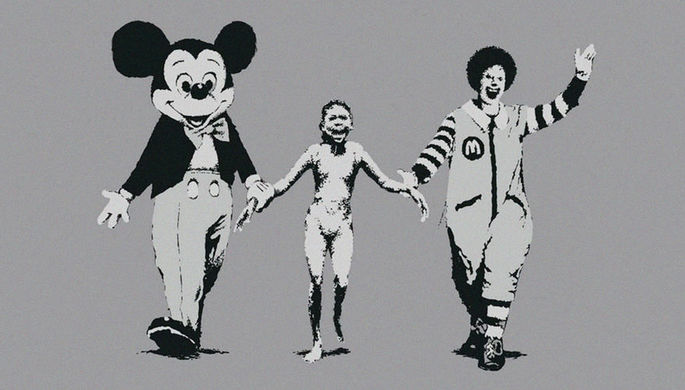 Now watch the video about Banksy's art and copy out the topical vocabulary used in it. Find the Russian equivalents.

4.In the next video you will get to know about Jacob Lawrence's works of art from his Migration Series.

Jacob Lawrence is an American painter whose works portray scenes of black life and history with vivid realism. He became the first African American artist whose work was acquired by The Museum of Modern Art in 1941, thus breaking a racial barrier at the time with segregation in full force.

Lawrence made Migration Series to tell an important story that had been previously overlooked. He once said, “I do not look upon the story of the Blacks in America as a separate experience to the American culture but as a part of the American heritage and experience as a whole.”

You can learn more about the artist here.

Watch the video and think about the meaning of the last phrase: "You have cultural figures who are using the cultural stage to make really broad appeals to pay attention to issues of race... he can use culture to cast a spotlight on the issues that plagued American society in 1941 and still plague American society today."

5.Modern art is a very controversial thing. For that reason we may have ideas like that:

“Skill without imagination is craftsmanship and gives us many useful objects such as wickerwork picnic baskets. Imagination without skill gives us modern art.” (Tom Stoppard, a British playwright and screenwriter, "Artist Descending a Staircase")

On the other hand, there is a different attitude: “Modern paintings are like women, you'll never enjoy them if you try to understand them.” (Freddie Mercury)

In the next video you will see a work of Andrei Molodkin/ It represents his vision of Russian history.

Watch the video WITHOUT SOUND and try NOT to think about the meaning, concentrate on your feelings and emotions.

Now watch the whole video and listen to the interpretation given.

One of my students used the word "blood-stained", refering to the Russian history depicted by Molodkin. In fact that oil in the tubes looks like blood and brings about such association. Though many dislike the installation and find it scary and appalling, it definitely can be called emotion-evoking and thought-provoking, which art should be.

6.Let us turn from the political aspects of art to more trivial things. Today practically anything can become an art object, even a hairstyle :) Watch the video about that.

7.Art can be not just your passion, it can bring you money as well. Watch the next video and learn what we call pictures that depict cities and what expression is used when you say that your feelings, emotions, ideas are transferred into the painting.

8.Watch the video about La Sagrada Familia Basilica, a brandchild of Antony Gaudi, which "spiritually touches your heart and your soul". The architect died in 1926, but the construction has been continued by many people and the completion is not expected soon. This church shows us that some artistic ideas can be too great to be realised by one person and during one century.

Learn more about the architect here.

9.We will finish with an art object which is a part of an idiom. Watch the video and learn the idiom.

PS: Do you normally associate art with crime? Can art be a crime? Watch the video.

Now try to summarize everything that you have learnt about art in this module and answer the question: What is art? Give a two-minute talk.