Еще пример: “Anatoly Chubais posted the following eulogy to Nemtsov on his official Rusnano website, and Ekho Moskvy picked it up. I am posting a portion of it here: Everybody knows that Boris is an absolutely incorruptible man, absolutely sincere, straightforwardly honest”. 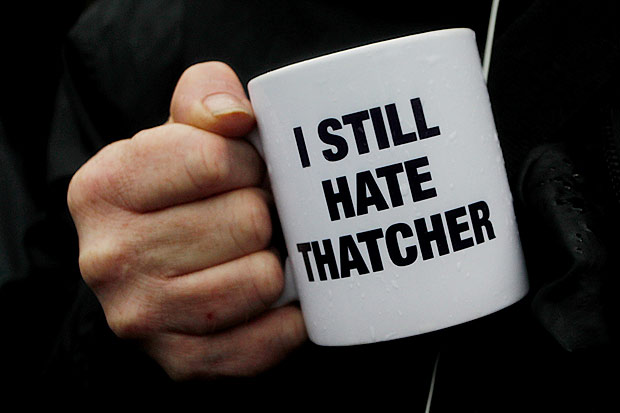 "We have lost a great president, a great American, and a great man. And I have lost a dear friend. "In his lifetime Ronald Reagan was such a cheerful and invigorating presence that it was easy to forget what daunting historic tasks he set himself. He sought to mend America's wounded spirit, to restore the strength of the free world, and to free the slaves of communism. "These were causes hard to accomplish and heavy with risk. "Yet they were pursued with almost a lightness of spirit. For Ronald Reagan also embodied another great cause - what Arnold Bennett once called 'the great cause of cheering us all up'.

"His politics had a freshness and optimism that won converts from every class and every nation - and ultimately from the very heart of the evil empire.

"Yet his humour often had a purpose beyond humour. In the terrible hours after the attempt on his life, his easy jokes gave reassurance to an anxious world. Ronald Reagan's life was providential. "They were evidence that in the aftermath of terror and in the midst of hysteria, one great heart at least remained sane and jocular. They were truly grace under pressure. "And perhaps they signified grace of a deeper kind. Ronnie himself certainly believed that he had been given back his life for a purpose. "As he told a priest after his recovery 'Whatever time I've got left now belongs to the Big Fella Upstairs'. "And surely it is hard to deny that Ronald Reagan's life was providential, when we look at what he achieved in the eight years that followed. "Others prophesied the decline of the West; he inspired America and its allies with renewed faith in their mission of freedom. "Others saw only limits to growth; he transformed a stagnant economy into an engine of opportunity.

"Others hoped, at best, for an uneasy cohabitation with the Soviet Union; he won the Cold War - not only without firing a shot, but also by inviting enemies out of their fortress and turning them into friends. When his enemies tested American resolve, they soon discovered that his resolve was firm and unyielding "I cannot imagine how any diplomat, or any dramatist, could improve on his words to Mikhail Gorbachev at the Geneva summit: 'Let me tell you why it is we distrust you.' Those words are candid and tough and they cannot have been easy to hear. But they are also a clear invitation to a new beginning and a new relationship that would be rooted in trust. "We live today in the world that Ronald Reagan began to reshape with those words. It is a very different world with different challenges and new dangers. All in all, however, it is one of greater freedom and prosperity, one more hopeful than the world he inherited on becoming president. "As prime minister, I worked closely with Ronald Reagan for eight of the most important years of all our lives. We talked regularly both before and after his presidency. And I have had time and cause to reflect on what made him a great president. "Ronald Reagan knew his own mind. He had firm principles - and, I believe, right ones. He expounded them clearly, he acted upon them decisively.

"When the world threw problems at the White House, he was not baffled, or disorientated, or overwhelmed. He knew almost instinctively what to do. "When his aides were preparing option papers for his decision, they were able to cut out entire rafts of proposals that they knew 'the Old Man' would never wear.

"When his allies came under Soviet or domestic pressure, they could look confidently to Washington for firm leadership. "And when his enemies tested American resolve, they soon discovered that his resolve was firm and unyielding. "Yet his ideas, though clear, were never simplistic. He saw the many sides of truth. "Yes, he warned that the Soviet Union had an insatiable drive for military power and territorial expansion; but he also sensed it was being eaten away by systemic failures impossible to reform. "Yes, he did not shrink from denouncing Moscow's 'evil empire'. But he realised that a man of goodwill might nonetheless emerge from within its dark corridors. "So the President resisted Soviet expansion and pressed down on Soviet weakness at every point until the day came when communism began to collapse beneath the combined weight of these pressures and its own failures." And when a man of goodwill did emerge from the ruins, President Reagan stepped forward to shake his hand and to offer sincere cooperation.

"Nothing was more typical of Ronald Reagan than that large-hearted magnanimity - and nothing was more American. "Therein lies perhaps the final explanation of his achievements. "Ronald Reagan carried the American people with him in his great endeavours because there was perfect sympathy between them. He and they loved America and what it stands for - freedom and opportunity for ordinary people." As an actor in Hollywood's golden age, he helped to make the American dream live for millions all over the globe. His own life was a fulfillment of that dream. "He never succumbed to the embarrassment some people feel about an honest expression of love of country. "He was able to say 'God Bless America' with equal fervour in public and in private. And so he was able to call confidently upon his fellow-countrymen to make sacrifices for America - and to make sacrifices for those who looked to America for hope and rescue. "With the lever of American patriotism, he lifted up the world. "And so today the world - in Prague, in Budapest, in Warsaw, in Sofia, in Bucharest, in Kiev and in Moscow itself - the world mourns the passing of the Great Liberator and echoes his prayer 'God Bless America'.

"Ronald Reagan's life was rich not only in public achievement, but also in private happiness. "Indeed, his public achievements were rooted in his private happiness. The great turning point of his life was his meeting and marriage with Nancy. "On that we have the plain testimony of a loving and grateful husband: 'Nancy came along and saved my soul.' We share her grief today. But we also share her pride - and the grief and pride of Ronnie's children. "For the final years of his life, Ronnie's mind was clouded by illness. That cloud has now lifted. "He is himself again - more himself than at any time on this earth. For we may be sure that the Big Fella Upstairs never forgets those who remember Him. "And as the last journey of this faithful pilgrim took him beyond the sunset, and as heaven's morning broke, I like to think - in the words of Bunyan - that 'all the trumpets sounded on the other side'. "We here still move in twilight. But we have one beacon to guide us that Ronald Reagan never had. "We have his example. Let us give thanks today for a life that achieved so much for all of God's children."